Our Humanity Is on the Line: Blog from COP26

Glasgow — a working class city of a million inhabitants located on the west coast of Scotland, known for being cold and damp, has given us a warm welcome.

Workers had strewn banners and pennants on every lamppost in town. Volunteers, ready to help guide you to your destination, are at every turn, checking wristbands that signify a negative COVID test result before being permitted to attend the People’s Summit talks, assemblies, and workshops.

The grassroots-supported COP26 Coalition has connected over 1,500 visitors with local housing. Nick and I stayed in a brightly decorated third story apartment in a quiet outlying neighborhood with a creative graphic designer and her cat. The hospitality has been phenomenal. 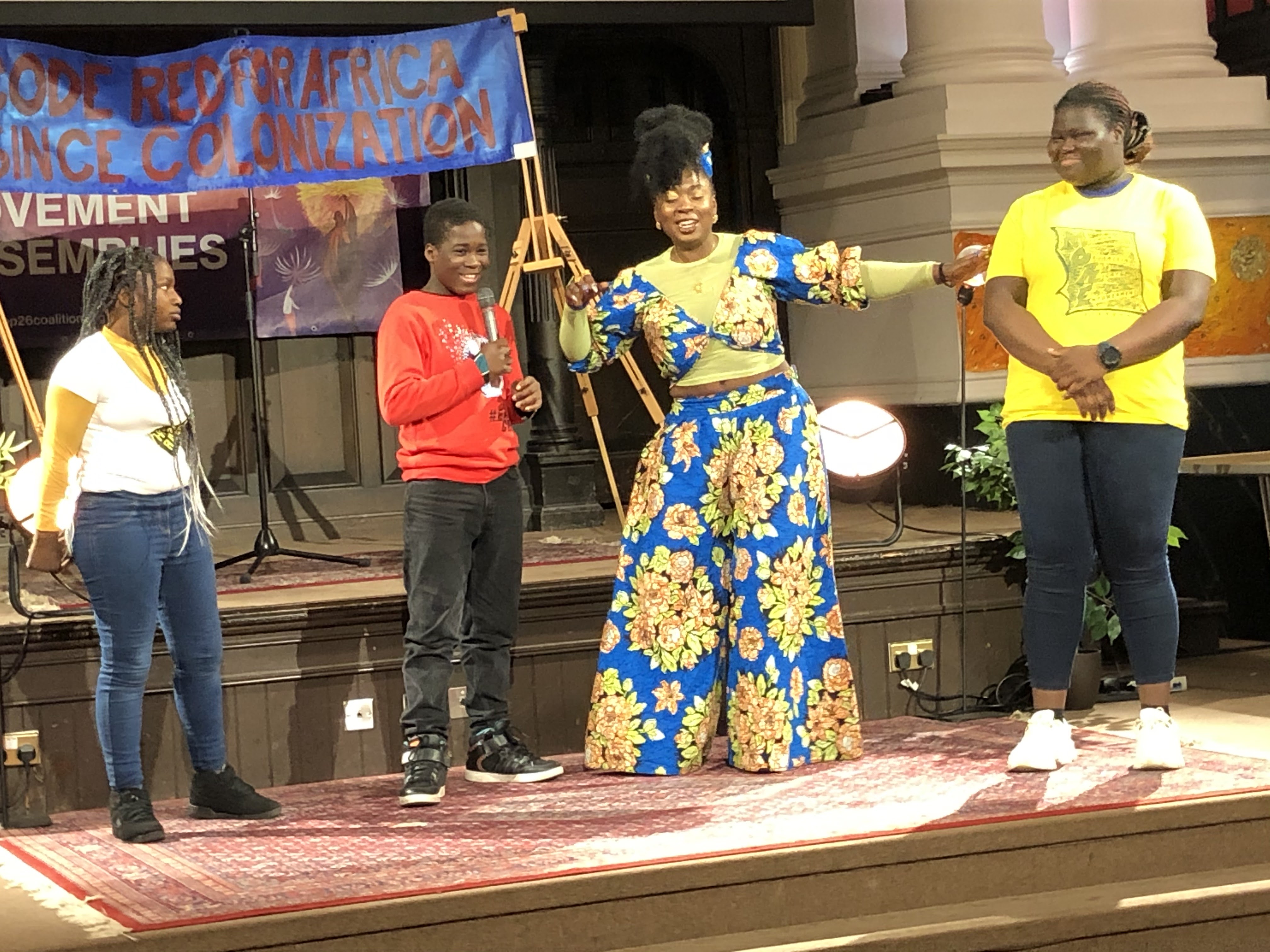 On the first night of the People’s Summit, which registered over 3,000 participants for over 400 in-person and online events, a Glaswegian community-based group—Migrants Organizing for Rights and Empowerment (MORE)—took center stage of a large Baptist Church that was filled to the rafters. “We would never have left our homes [in Nigeria] if the sea wasn’t safer than the land,” shared a migrant mother in a powerful, inter-generational theater performance.

The news in the UK is filled with daily stories of people being killed at sea, trying to escape desperate circumstances. It is well understood that many of these conflicts stem from problems such as drought and contamination of soil and water supplies by oil companies like Shell—that are rooted in the climate crisis.

Among many activities that support migrant families, MORE organized a cycling club and provided bikes to their members to promote wellness during the pandemic. Their stories of resilience—overcoming violence, land dispossession, dangerous journeys, racism, and poverty—by building a solidarity-based community here in Glasgow moved us to tears. 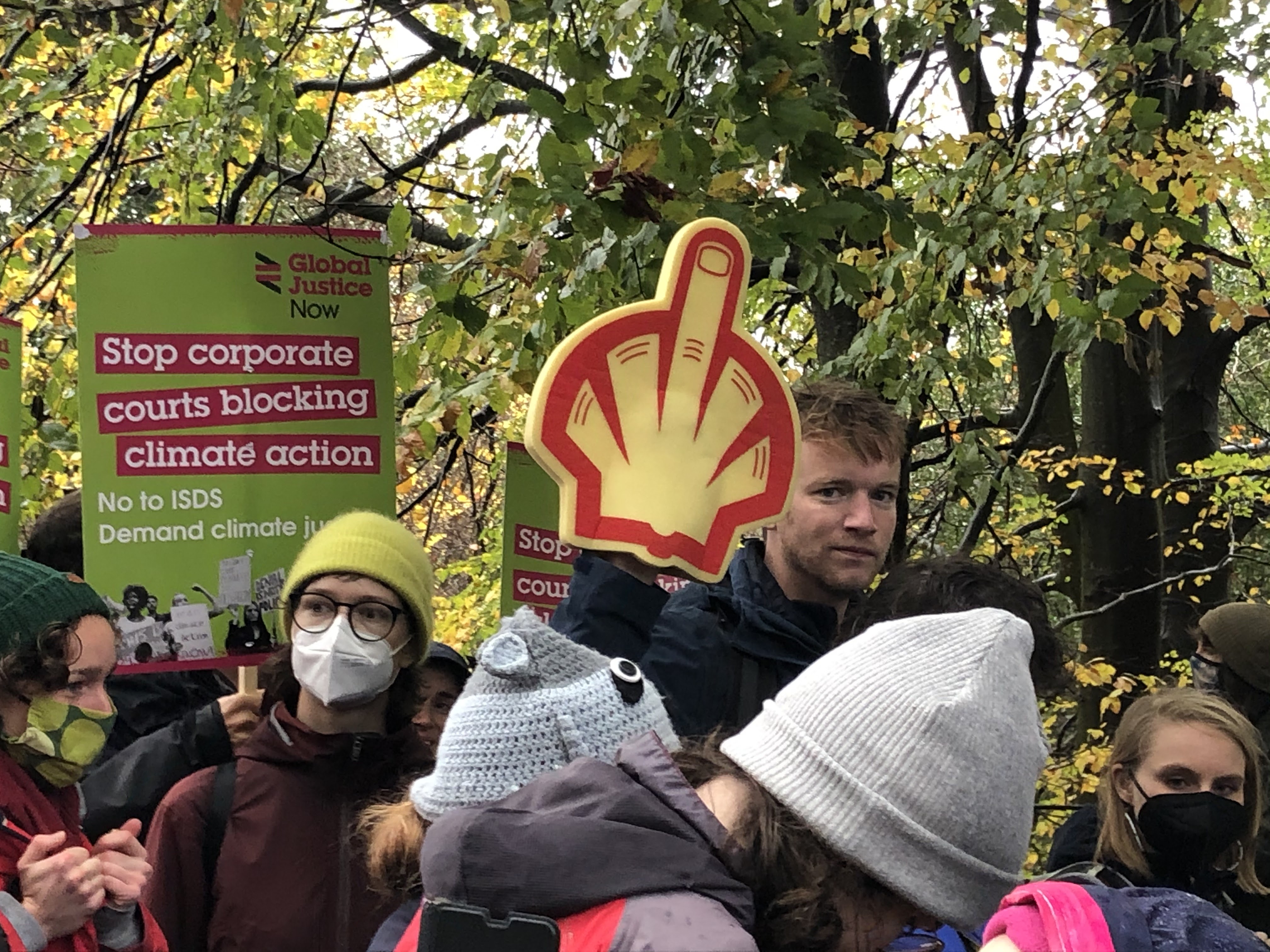 The main goal of the 26th United Nations Conference of Parties (COP26) is to keep global average temperature rise below 1.5 degree Celsius, but equatorial regions in Africa and across the globe have already surpassed that.

The stories from around the world were daunting. A young woman from Tibet described in alarming detail the biggest climate catastrophe you rarely hear of: the melting of glaciers on the Himalayan plateau, her Native ancestral homeland, threatens the water supply for over a billion people. 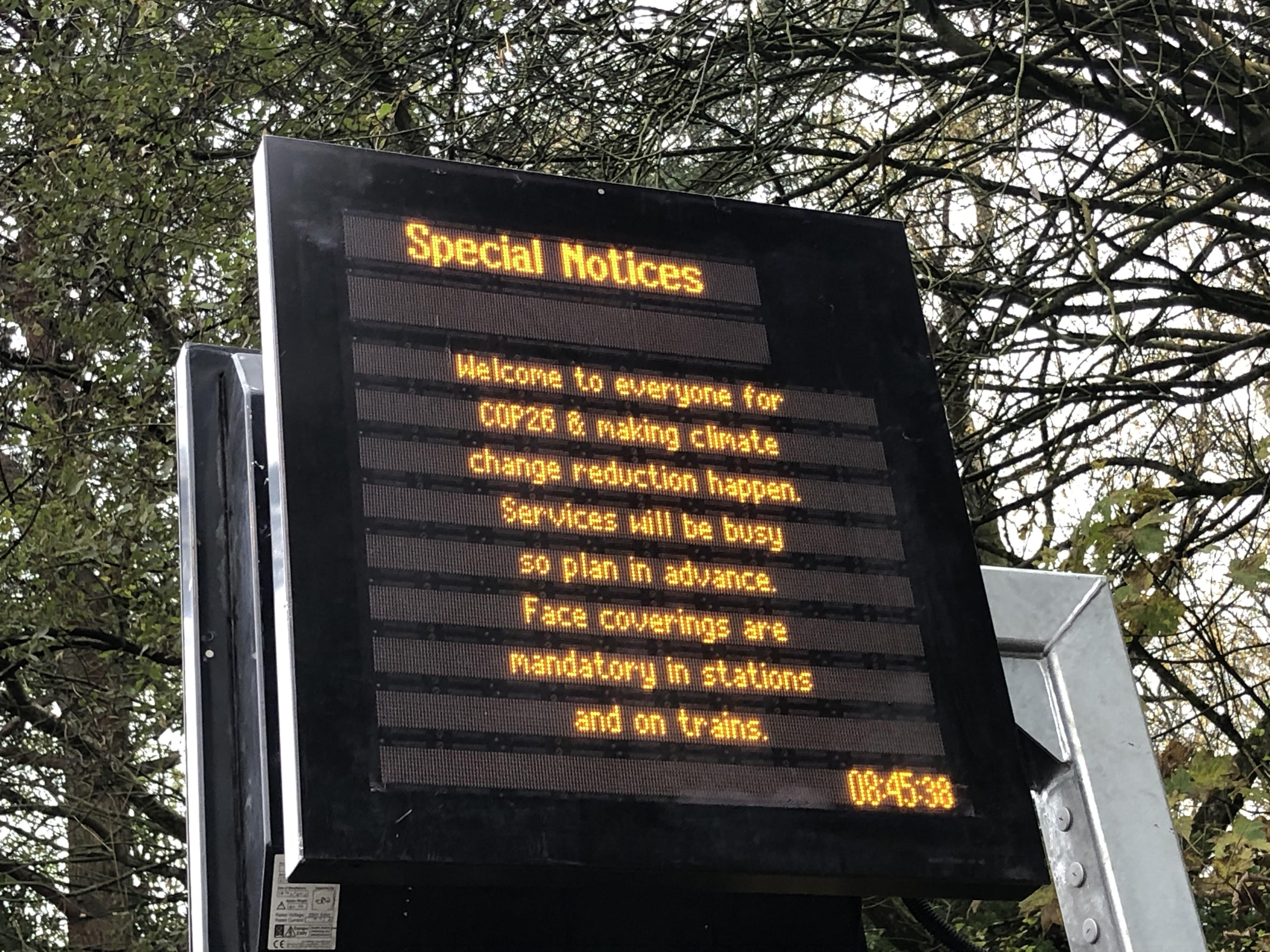 A sense of betrayal and cynicism permeated the discussions about the COP. The very people that are experiencing climate change the most are being excluded from the key COP26 decision-making spaces.

Waiting for the train to travel to the city center one morning, I spoke with two official delegates from Namibia that said they often weren’t allowed into the plenary sessions and had to watch the proceedings from a projected screen in the corridor. “My country has contributed nothing to the climate crisis—our

emissions are like .0001 percent of global emissions. We are suffering the most but we can’t even get in to make an intervention,” they shared despairingly.

Climate Debt: Who Owes Whom?

At the Copenhagen COP in 2009, wealthy countries of the “global north” promised to provide $100 billion a year by 2020 to countries like Namibia, Bangladesh, Pacific Island nations, and the Philippines—which are suffering the gravest impacts from increasing droughts, rising sea levels, and destructive storms—but the financing hasn’t materialized.

The funding to help vulnerable counties adapt and respond to the climate crisis is mostly in the form of loans, not grants, which will add to countries’ heavy debt burden, part of a failed prescription for Western development that exacerbates climate change as countries cater to extractive industries at the expense of protecting their environment and guaranteeing human rights.

In fact, lower income countries are spending over five times more on external debt payments than projects to protect people from the impacts of climate change. The figures, released today by Jubilee Debt Campaign, show that 34 countries are spending $5.4 billion a year on adjusting to the impacts of climate change already underway, but $29.4 billion on debt payments which leave the country. 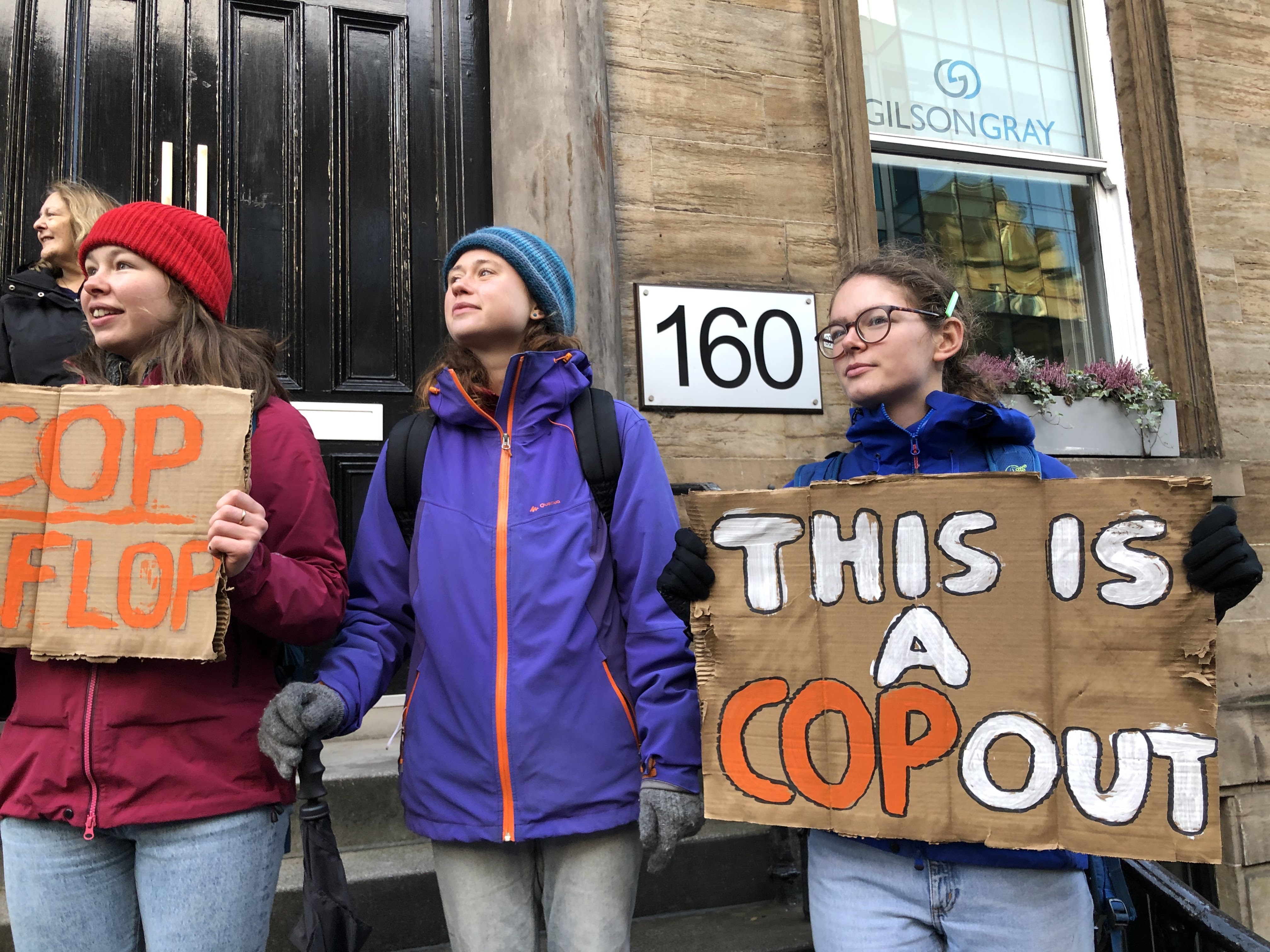 “Now is the time to increase pressure on our governments!” exhorted Theresa Anderson, a veteran participant of previous COPs, now with the civil society organization Actionaid, to a packed, full capacity crowd gathered for the nightly “People’s Assembly” report back on the United Nation’s summit proceedings. “We can’t let up!” 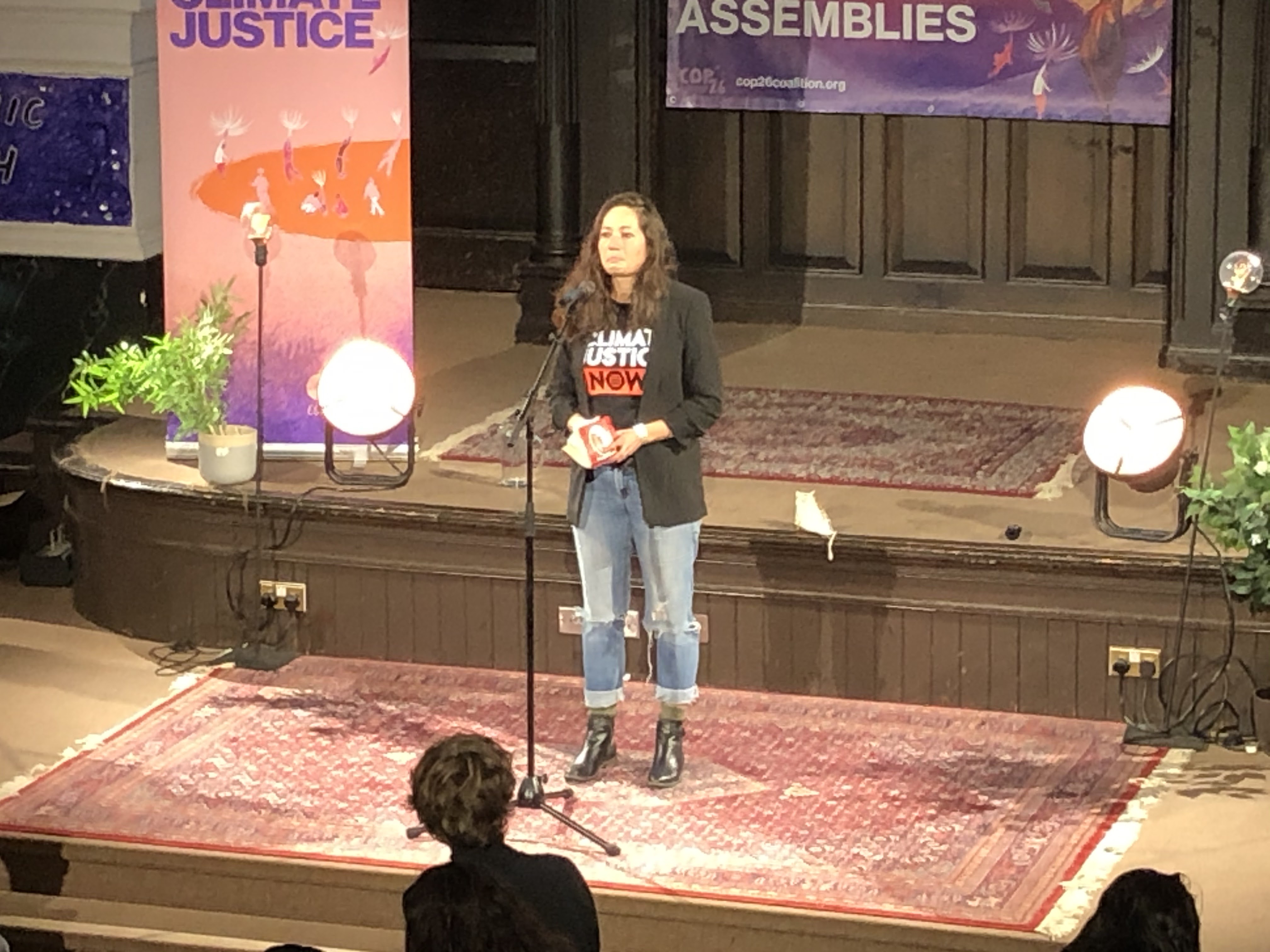 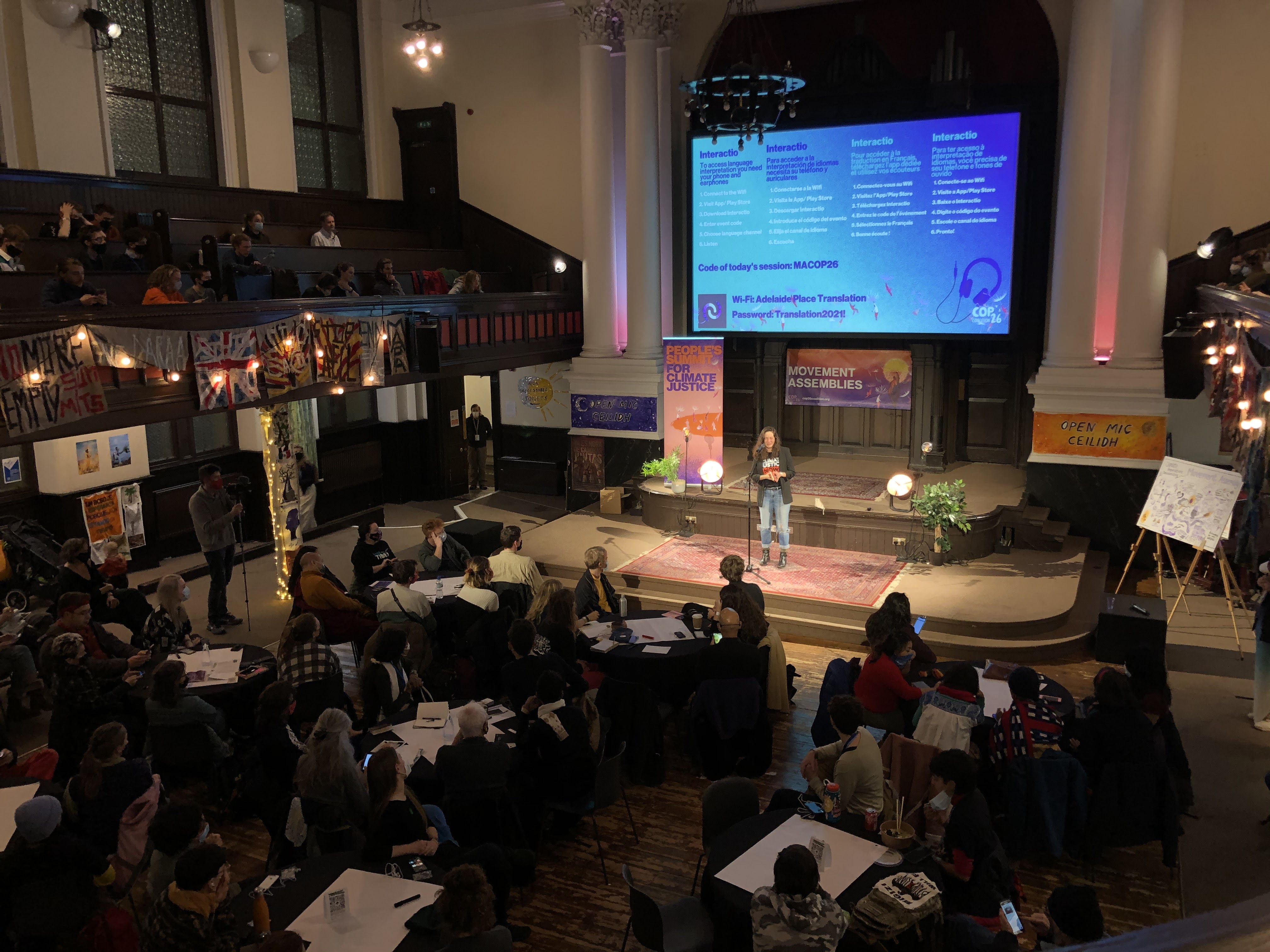 “We all have a role to play, Ashley Fairbanks, Native American youth organizer against the Line 3 Pipeline, shared at a panel discussion earlier this week.  “I come here with an open wound knowing that three weeks ago, oil started flowing in the Line 3 pipeline despite President Biden’s campaign promises to respect indigenous sovereignty.” 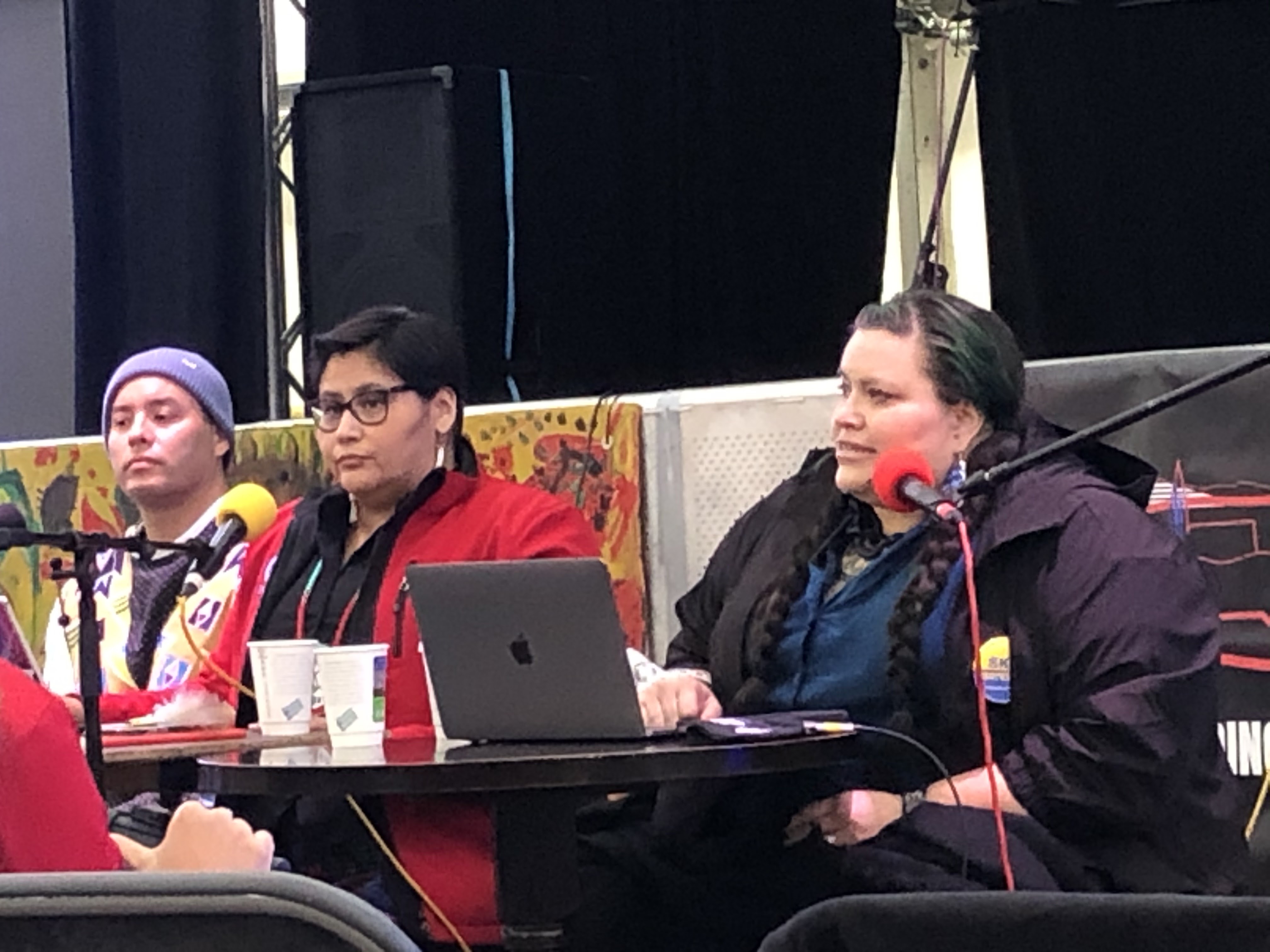 Our roadmap for a just transition:

Davis, California, a self-declared sanctuary city, is developing its own climate action and adaptation plan in response to the climate emergency now affecting every living thing on our “magnificent planet.”

What has been made clear by the hundreds of frontline community members like Ashley Fairbanks that have come to Glasgow to share their stories in defense of Mother Earth, is that the real solutions to this multi-faceted crisis will only come when those that are most affected by climate change are present and centered in the conversation. 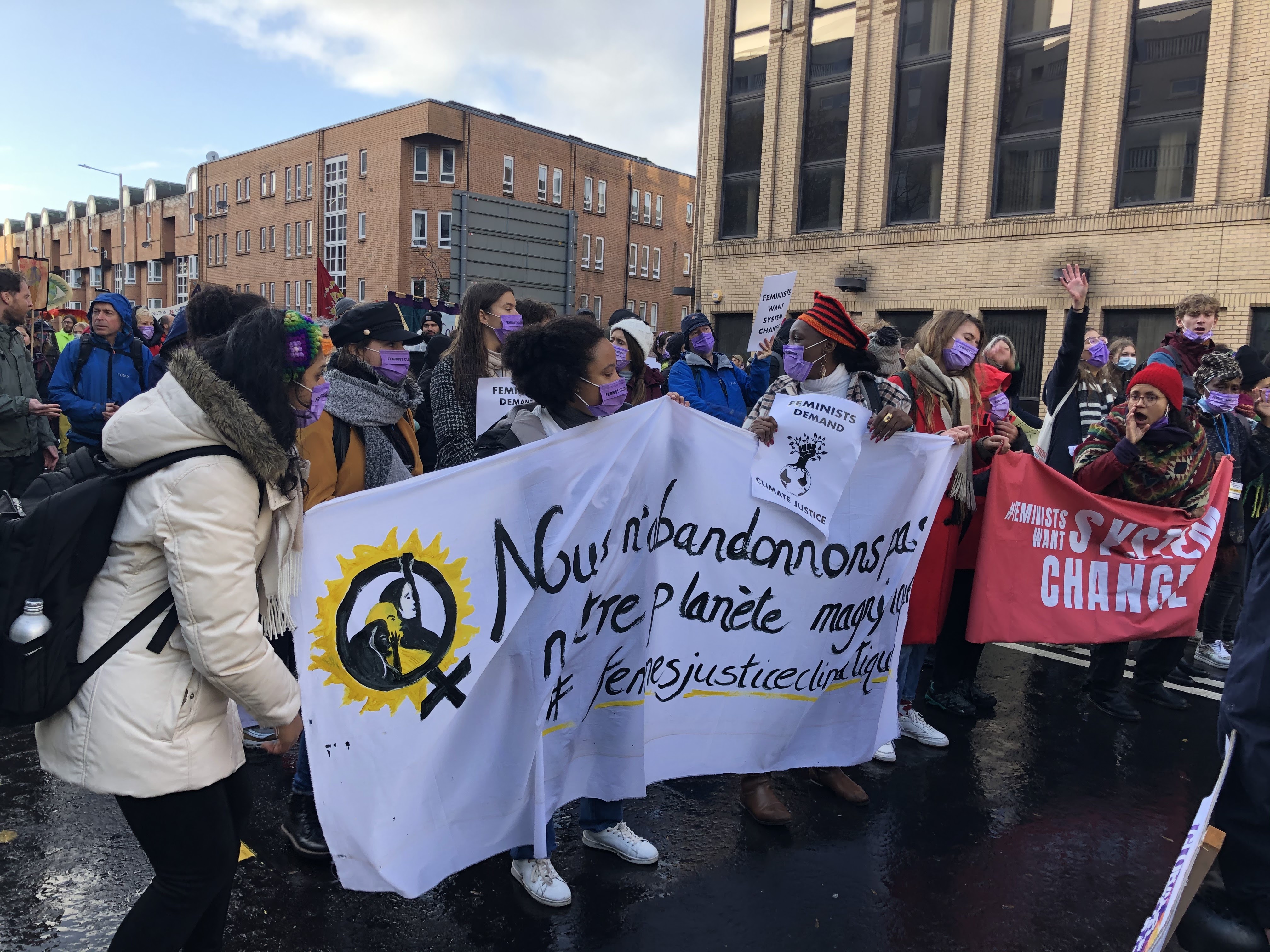 Women marching in the Nov. 6 Global Day of Climate Action in Glasgow hold a banner that reads  “We will not abandon our magnificent planet.”

Are the voices of our most vulnerable and historically marginalized community members being centered in the process of developing Davis’ local climate plan? What has been the response of immigrant community members? Homeless advocates? People focused on addressing equity and social justice—our Human Rights Commission and inter-faith community organizations? The Wintun Nation tribes and indigenous community members whose knowledge systems combine science and holistic ways of thinking? Have outdoor workers been adequately consulted?

Have the young people that have been the most vocal in calling for systemic change, that are rising to the greatest challenge of our time with inspiring and insightful leadership, been effectively engaged? 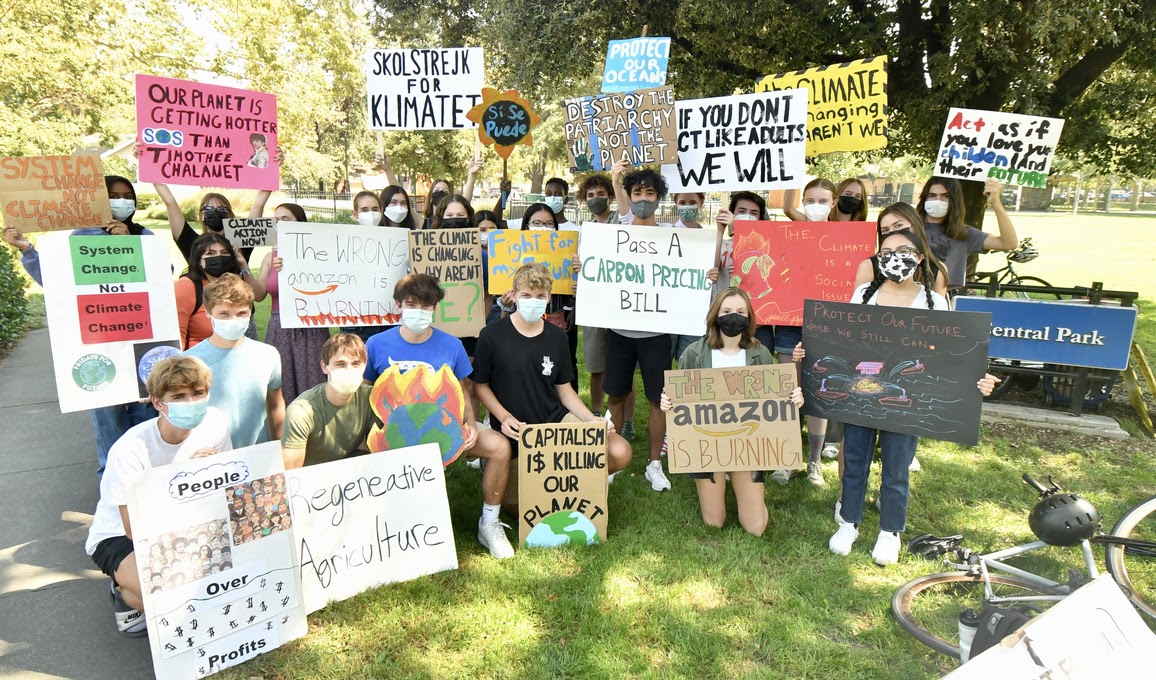 Dozens of young people gathered for the September 24, 2021 Climate Strike in Davis

When attending the Davis CAAP workshop scheduled for Wed. Nov.10 at 5:30pm, please take into consideration the fundamental issues of climate debt, equity, inclusivity and diversity. These concerns should be at the heart of our community’s solutions or just like the COP, we may fall way short of what is truly needed, what both history and future generations are counting on us to get right. Our humanity is on the line.

–Juliette Beck is a Davis resident and climate activist attending the COP26 Coalition’s People’s Summit this week in Glasgow, Scotland.